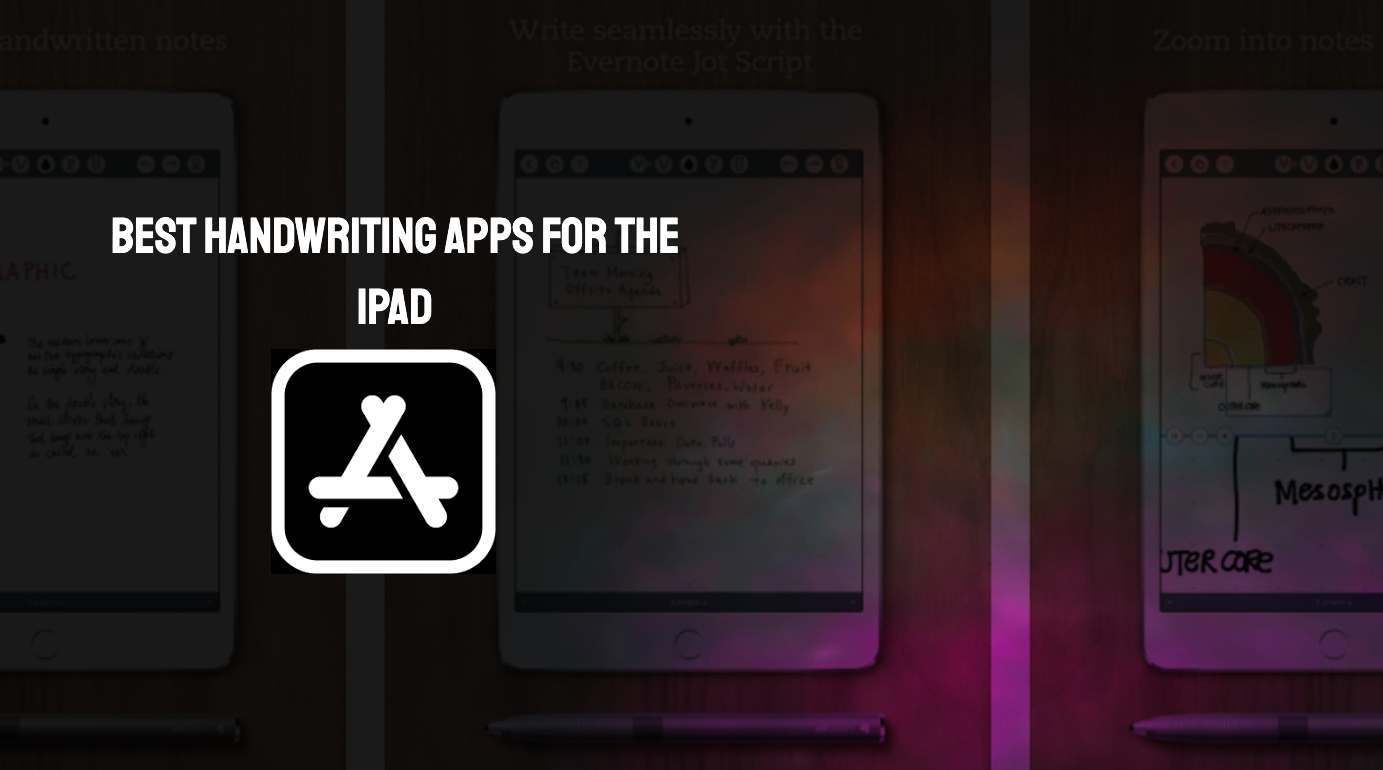 The iPad is perfectly suited for an activity such as handwriting. The screens are large, the bezels provide a good rest for your palm, and everything is just laid out so well. Of course, you’ll need some great apps in order to do all of this so here are the best handwriting apps for the iPad! If you have an Android device, our sister site has a great list of the best note taking apps for Android!

[Price: $0.99 with in-app purchases]
First on our list is Jotter. This handwriting app is a fairly simple app that lets you do pretty much what it says it does which is let you jot stuff down. It does come with unique features like a pen that writes thinner or thicker depending on your writing speed, highlighter functions, zoom, iCloud support, and much more. It’s relatively inexpensive at $0.99 with the in-app purchases consisting mostly of various types of paper you can use.

[Price: Free]
MyScript Calculator isn’t your usual handwriting app. Instead, it’s actually a calculator that lets you jot down equations which it will then solve. It’s not overly powerful and it can’t do your advanced calculus homework, but simple things and a good deal of algebra shouldn’t be too much trouble. It’s a totally free application and one of the more unique uses of handwriting we’ve seen.

[Price: $8.99]
Notability is one of the more powerful and popular handwriting apps available on the iPad. It has a host of features for all kinds of writing styles and includes a split view so you can browse documents or other PDFs and take notes simultaneously. It also features various fonts, colors, and sizes as well as PDF annotation (including signing PDFs), palm detection to avoid any accidents, and plenty of other features. It’s a tad expensive, but there are no in-app purchases.

[Price: $4.99 with in-app purchases]
NoteLedge is a note taking app that was developed specifically for the iPad. It includes some decent features such as a full set of stylus options including pencils, crayons, and watercolor which makes this app good for taking notes or drawing if you want. It has palm detection to help minimize errors and there are even some unique features such as audio and video recording. It’s a bit expensive, especially considering it has in-app purchases, but the feature set is solid.

[Price: $19.99]
Notepad+ is a powerful note taking application with a ton of features and a decent price. Some of the features include the ability to annotate PDF files, adding titles to notes, creating a virtual whiteboard, and plenty of others. This one aims for those who need to take notes during things like business meetings, lectures, and conferences and provides a lot of features specifically for those folks. There are also no in-app purchases.

[Price: $9.99]
Notes Plus is a bit more obscure of an application despite being one of the first note taking applications available after the iPad’s first release. It does have a solid set of features, including the option to use handwriting or typed text. You can also upload to Dropbox, insert images into notes, palm rejection, and zoom for close up writing. It can also convert written text to typed text if you need it. It’s a bit expensive and newer versions haven’t hit the mark with reviewers, but it’s a decent app nonetheless.

[Price: $9.99 with in-app purchases]
Noteshelf is another popular note taking application with handwriting support built right in. The one has a lot of the standard stuff like palm detection, and various customization features like notebook covers and more. However, the real unique stuff is in the security and organization. You can set passwords to protect your notes from prying eyes and the organization features are similar to that of something like Evernote. The in-app purchases are fairly innocuous and shouldn’t spur too much anguish.

[Price: $4.99]
Note Taker HD is another note taking app that’s a little more obscure than others. It aims at those who need these apps for business, academia, and similar occupations and activities. It features some decent organization that lets you tag notes in order to easily categorize them. It also supports PDFs, diagrams, and plenty of other rich content to make your notes really sparkle. It even has support for AirPlay. There are also no in-app purchases.

[Price: Free with in-app purchases]
Last, but certainly not least on our list is Penultimate. This is a wildly popular note taking application and it also happens to support handwriting. It’s developed by the same team that does Evernote so you know it’s pretty good. It features support for various styli along with a lot of the same features you’ll find in Evernote. That includes its hallmark organization features. It’s free to download so there’s no harm in trying it out. It’s also perfect for those who also use Evernote.